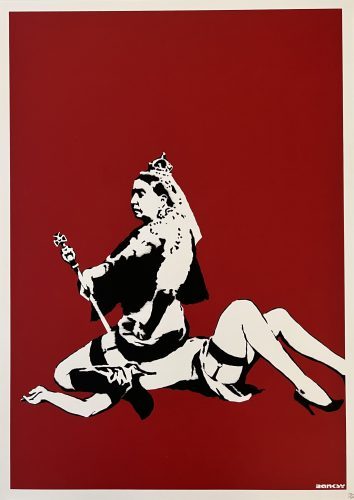 CURRENTLY WE HAVE NO ART WORK by Banksy

The graffiti artist and street artist Banksy (British, born approx. 1974/1975) is, despite his secret identity, one of the most well-known artists in England of this time. Bansky is the pseudonym adopted by the artist. He is very careful to keep his private life secret, most of the details of his life are unknown to the public. He is very successful with his graffiti works, which often feature a combination of spray paint and stenciling techniques, with a commercial, political and contemporary imagery, interspersed with irony and humor. Banksy publicly criticizes companies and the economy, his works can be seen on company buildings and billboards.

The unveiling of many of Banksy’s new works often seems like a prank or a performance. He secretly and unasked added his own works to museums like the Tate Modern in London or the Louvre in Paris, he opened exhibitions in galleries to the public with bred rats running around the gallery, and he placed an inflatable doll that dressed like a Guantanamo Bay prisoner at Disneyland amusement park in California. In addition to his street art, Banksy has created works for various charities, such as Greenpeace. He currently lives and works in Bristol, England.